Though many people are aware of the origins of chocolate in ancient Mesoamerica, fewer know that it was valued for more than its flavor: cacao beans, from which chocolate is made, were used as currency across Mesoamerica. Today, the idea of paying for goods and services with food seems foreign to most in the Western world. The practice of eating things that we consider currency, though, is certainly not unheard of: a rising culinary trend has restaurants and companies topping everything from sushi to Kit Kat bars with gold.

Eating money ostentatiously marks the one eating as wealthy and elite. Though gold leaf is easily available from specialty grocers, eating gold is fairly unusual today, in contrast to the regular consumption of cacao in ancient Mesoamerica. Images: James Cronin/Flickr; Forbes.

The use of cacao beans as money was unique, even in the context of the barter-based trade economy that spanned the Americas, and reflects the elite status cacao held in Mesoamerican society. Cacao’s role as currency may have had a more important role than previously considered in its transition from the New World to the Old World.

Cacao and the Maya

Cacao had a central place in Maya society, one that is often overshadowed by its importance in the later Aztec Empire. Chocolate was consumed at marriage negotiations and weddings and elaborate feasts of all kinds, and high-status Maya burial chambers often contained vessels filled with chocolate beverages – ostensibly to accompany the deceased on their journey to the afterlife (Coe & Coe 42). 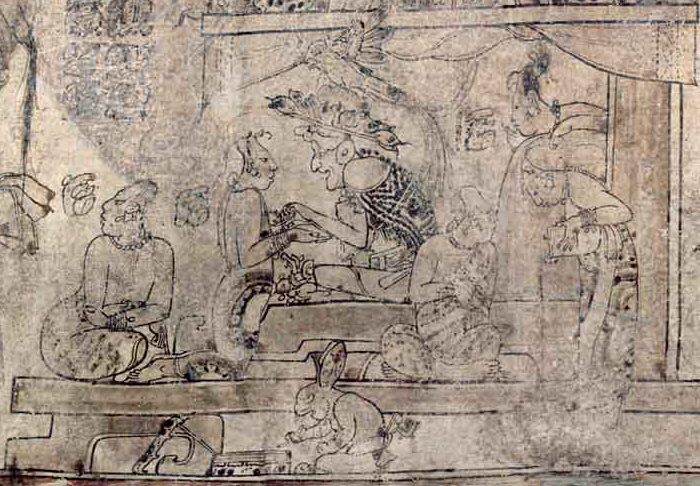 On the far right, a woman prepares a chocolate beverage. The preparation and consumption of cacao beverages was a part of many Mayan rites of passage, as well as Mayan daily life. Image: Francis Robicsek, The Maya Book of the Dead.

Cacao was an important trade good for the Maya, and a strong cacao trade emerged in the Late Classic period. The use of cacao beans as a quasi-stable currency likely evolved from the regular exchange of cacao for other goods. By the 10th century, the Maya held an important mercantile position in Mesoamerica, exchanging goods between Maya states and with other peoples both north and south (Coe & Coe 53). The centrality of cacao to the Maya economy may have played a role in its emergence as currency.

The use of cacao beans as money, with a fixed rate of exchange with various other goods, may have begun just as early or earlier. It certainly appears in several European accounts from the Colonial period: Francisco Oviedo y Valdés, a chronicler from the 16th-century, did not identify the cacao beans as cacao but noted that about ten of the beans could be exchanged for a rabbit and about a hundred could be exchanged for a slave (Coe & Coe 59).  Cacao beans were in widespread use as currency by the Colonial Period.

Tenochtitlan and the Aztecs

The cacao trade was just as important for the Aztec as the Maya, if not more: the Aztec capital Tenochtitlan did not have a climate that would allow the Aztecs to cultivate cacao on their own (Presilla 17). Aztec merchants traveled far and wide to barter for cacao and bring it back to Tenochtitlan. Emperor Motecuhzoma’s royal coffers were said to contain nearly a billion beans (Coe & Coe 83); the Aztecs certainly worked hard to have access to a great deal of cacao. Like the Maya, the Aztecs used cacao beans to make purchases: Colonial documents report the prices of male and female turkeys (200 and 100 cacao beans, respectively), avocados (three beans), and other foods (Coe & Coe 99). 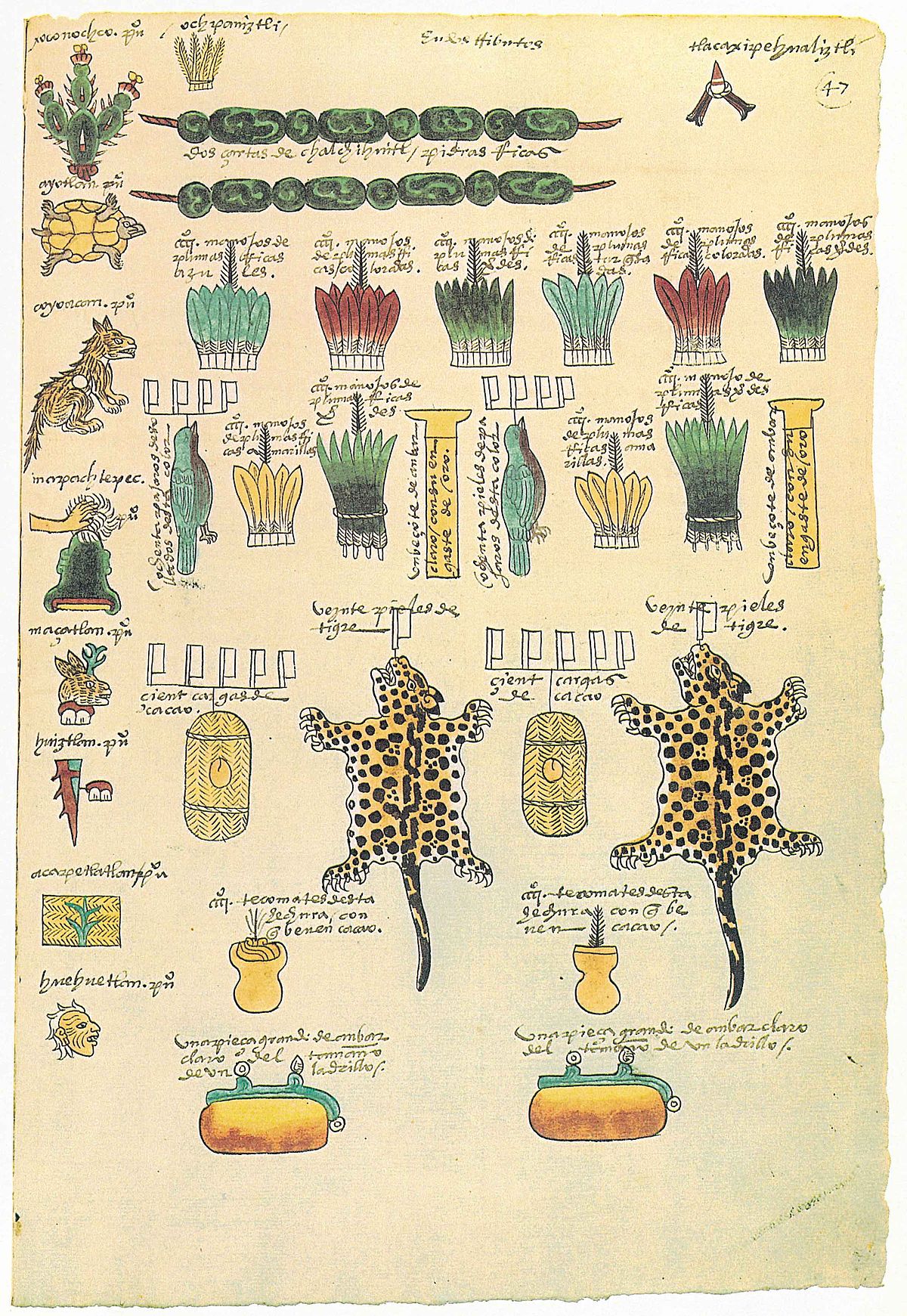 Among the gifts brought from Xoconochco to the Aztec rulers  in tribute were nearly 24,000 cacao beans. The Aztecs prized cacao, and the royals at Tenochtitlan absorbed cacao from several smaller states through tribute. Image: Codex Mendoza, Wikipedia.

But though the Aztec trade and currency systems surrounding cacao were similar to those of the Maya, the consumption of cacao (had different rules). The finest chocolate beverages were likely restricted to the Maya elite, but there is still reason to believe that cacao was consumed as well by Maya commoners. This was not the case with the Aztecs: chocolate was consumed only by Aztec royals, nobility, warriors, and merchants (Coe & Coe 95). This may have had roots in the stratified nature of Aztec society, or it may have been influenced more directly by the economic value of cacao. In a society that could not grow its own cacao at the capital, supply would need to be carefully maintained in order to continue to meet royal and noble demand.

The early Spanish conquerers were first interested in cacao not for its flavor, but for its economic importance (Presilla 18). Ferdinand Columbus, traveling with his father, observed natives stooping to pick up spilled cacao beans and before even knowing that they were cacao beans, realized that they had value (Coe & Coe 109). If cacao beans hadn’t been used as currency, it is entirely possible that the elite stigma associated with chocolate consumption would have disappeared. Early European accounts did not praise the taste of chocolate: “It seemed more a drink for pigs, than a drink for humanity,” Girolamo Benzoni wrote (Coe & Coe 110). Chocolate was first drunk in Europe when presented as a gift to the Spanish royal court by the Kekchi Maya in 1544 (Presilla 25). Without its place at the Maya royal banquets in the New World, it might never have been carried across the ocean at all.

Without cacao’s dual role as beverage and currency, chocolate as we know it today might never have existed.