An essential component to the longevity of a successful company is maintaining an established customer base. While there are many strategies for maintaining this base over time, companies heavily rely on various branding techniques to attract new customers to their products. In the food services industry in particular, advertisements and the evolution thereof have been used to increase consumers’ confidence in companies’ products on physical and emotional levels. By exploring how companies use advertising for offensive and defensive purposes, we can better understand why the lifespan of some companies have lasted for generations. A historical analysis of branding in the food services industry will reveal that effective offensive and defensive advertising is paramount to the long-term growth of companies because it establishes cross-generational trust and brand loyalty.

First, defensive advertising was especially important in the 18th and 19th centuries when concerns about food safety were dominating discourses in England. In his article “Industrial Food: Towards the Development of a World Cuisine”, Jack Goody explains that food adulteration, the process of adding poisonous or unsafe substances in food, is a byproduct of consumers being far removed from the production of the food that they eat. After the 11th century, for example, the growth of town life meant that merchants and shopkeepers had to rely on others for their food supply; “and it was these non-food producers who were the targets (and sometimes the perpetrators) of adulteration” (Goody 86). In the following centuries, as town life became more prominent, adulteration became a social problem that centered around the manufacturing industry and the industrialization of food. While literature on food adulteration had been available since the 18th century, an uproar was caused in 1855 when Dr. Hassall published a series of reports that revealed that 22 out of 50 samples taken of arrowroot were adulterated (86). To combat these negative reports, companies began to highlight how safe their food products were. As depicted in the print ad below for the Cadbury Company, having food that was “pure” and “fulfill[ed] every requirement” was an important measure for separating them from their competition. 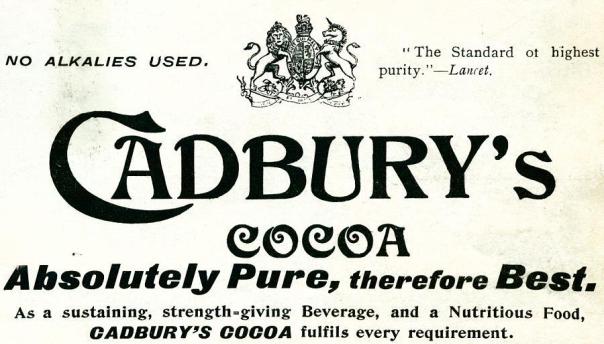 In this instance, Cadbury utilized defensive advertising to give consumers faith that Cadbury’s chocolate was safe for consumption. This deliberate attempt to gain consumers’ trust, in addition to the fact that Cadbury still produces chocolate products today, exemplifies the fact that, when presented at the right time, defensive advertising can aid a company through periods of marketplace uncertainty.

Secondly, offensive advertisement is needed to establish intergenerational brand loyalty. In the American context, the Hershey Chocolate Company has done an exceptional job at setting the standard for evolution branding over time. Hershey was able to establish itself in the marketplace by becoming invested and embedded in the economies surrounding their factories. In the early 1900s, used the revenue that it had generated to aid its sales force in securing orders via face-to-face transactions with retailers (D’Antonio 121). Because the sales force interacted with clients personally, it was crucial that the Hershey brand maintained some prestige. Hershey solidified its hold on the market because of actions taken at the consumer and corporate levels. For consumers, Milton S. Hershey was a Santa Claus-like figure who spread happiness with his five-cent candies (114). This association, regardless of its validity, gave Hershey the upper hand in dominating America’s chocolate market. At the corporate level, offensive advertisements like the ones below and the strategic renaming of products (121) contributed to the company’s success. 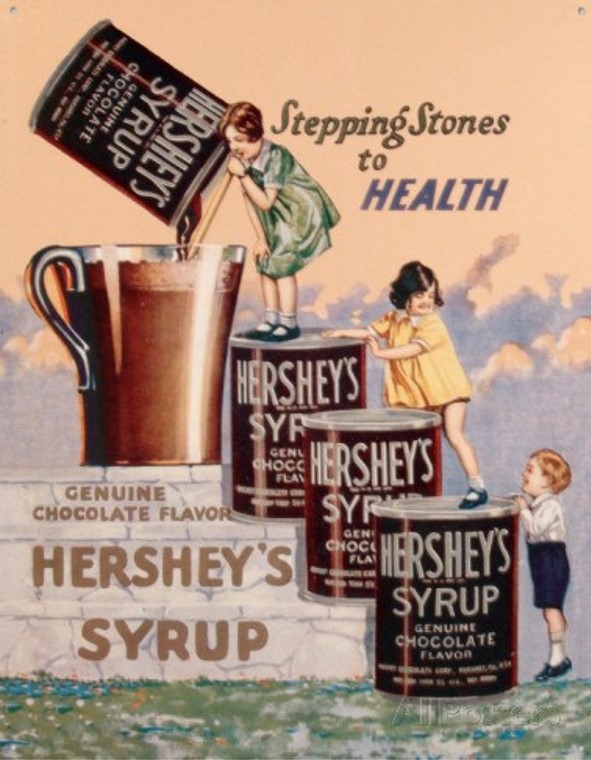 These ads have cross-generational appeal because they tug at basic human emotions: love, passion, enjoyment. By establishing emotional connections between the products and the consumers, companies are able to have lasting social relevance. Positive advertisement is at the center of this resonance because of the images that they bring to mind.

All in all, advertising and branding are powerful tools that companies can use to leave lasting impressions on groups of individuals. Not only do they make consumers trust products more, they also subliminally force consumers to make associations between their daily lives and the products they use. These connections, then, are passed down and maintained through generations through shared experience. Both offensive and defensive advertisements are able to have lasting impacts on the markets that they operate in because of the emotions that they elicit.