For an industry trying to rid itself of a reputation rooted in unfair labor practices and misrepresentation, DOVE’s advertisement (below) does the opposite. The contrast between black and white appears prominently, the presumed consumption of chocolate by a woman suggests its gendered attribution, and the portion-controlled offering insinuates that people do not have the ability to resist consuming chocolate, overemphasizing its alluring effects. In the following analysis, I consider these three shortcomings of this advertisement, and create an alternative option which takes them into account. Instead of marketing chocolate in a racialized, sexualized, and obsessive manner like DOVE, and many chocolate companies do today, the new advertisement I created focuses on giving chocolate as a gift between friends. By placing the pieces of chocolate in the shape of a heart, the intention is twofold: to value the source of its production and to demonstrate the way chocolate can bring people together.

DOVE Chocolate was founded by Leo Stefanos in the 1950s, who named “the new treat after his south side candy shop, a moniker chosen for its ‘peaceful’ quality” (Dove Chocolate 2009). See the DOVE Chocolate timeline here. In 1986, DOVE was acquired by M&M/Mars, which worked to improve the appeal of the chocolate, refining DOVE’s taste in the process. DOVE is known as a creamy indulgence, lying on a spectrum between the all-American Hershey and high-end Ghirardelli products. The advertisement above, released in 2008, demonstrates the line’s emphasis on how DOVE gives its consumer ‘me-time.’ The product is intended to be indulgent, using pure cocoa butter to create a smooth texture; DOVE centers its advertising approach on giving consumers their “me” moments in the midst of busy work and home lives.

Upon viewing the DOVE advertisement initially, I noted the contrasting dark and light shades throughout the image. Chocolate and vanilla have long served as metaphors for race (Martin Lecture 9). Vanilla is linked to whiteness, associated with purity and cleanliness, while chocolate is linked to blackness, associated with impurity and sin, dirtiness, and sexuality. In this advertisement, the brown bed sheets signify darkness, closely resembling the color of the chocolate bar at the bottom of the image, and representing the enslaved West African cacao farmers. The woman’s expression portrays the pleasure experienced by a white consumer after enjoying a piece of DOVE Chocolate, removed from the labor of the farmers which provides the source of her contentment. Carol Off demonstrates her reaction to the forced labor that children in Cote d’Ivoire perform. “I feel the profound irony before me: the children who struggle to produce the small delights of life in the world I come from have never known such pleasure, and most likely, they never will” (2008).

The advertisement’s use of dark and light represents the distinction between the wealthy, white American customer who blissfully dreams of the piece of DOVE Chocolate she ate and the West African cacao farmers who toil away to produce it. The use of contrasting colors and shades extends its role in symbolizing darkness and whiteness; chocolate serves as a euphemism for people of color against the color of the white woman who has just enjoyed chocolate as an indulgent treat.

The woman’s presence in the DOVE Chocolate advertisement portrays females as irrational actors who use chocolate to indulge themselves. The woman seems lost in an alternative world as a result of consuming chocolate. In fact, “the consumption of chocolate in the west became feminized early in its history” (Robertson 2009). Here, and in many other chocolate ads, women are portrayed as having a sexualized relationship with chocolate (Robertson 2009). Thus its marketing includes romanticism and self-indulgence, continuing the stereotype of an excessive passion related to chocolate consumption.

Finally, this image’s advertisement of portion-controlled chocolate emphasizes the fact that consumers cannot refrain from eating too much chocolate, particularly in the West. Candy became demonized alongside the temperance movement in the late eighteenth century (Martin Lecture 7). Candy became increasingly regarded as the cause for childhood cavities and obesity among “overindulging adults.” Lawrence Allen explores how the Big Five chocolate companies battled over their presence in China, evaluating the difference between the perception of chocolate as a good in the East versus the West. “It is also the inside story of East meeting West through the introduction into China, a xenophobic land of austerity and deprivation, of an icon of the Western world’s decadence and self-indulgence: chocolate” (2010). The Western market’s regard for chocolate as a luxurious, indulgent good for oneself contrasted with the Eastern image of chocolate for gift-giving purposes. However, alongside this self-indulgent use is the idea that people do not have the self-control to limit their consumption, which is suggested through the woman’s expression and the wording at the bottom of the ad. 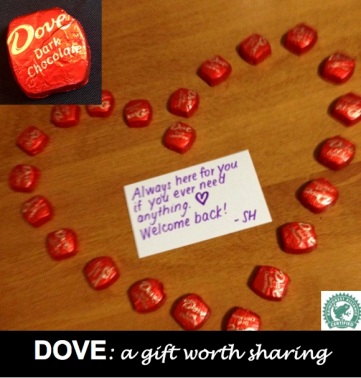 Above, I created an alternative advertisement for DOVE Chocolate. It excludes the presence of people in order to remove stereotypes based on race, ethnicity, and gender. This omission also removes any sexualized themes from the advertisement. In this ad, chocolate is not portrayed as an object that cannot be resisted; instead of focusing on self-indulgence through having a “[me] moment,” DOVE Chocolate is used to do something for others. While DOVE encourages people to reconnect with themselves, my advertisement encourages them to reconnect with each other and with its sourcing. I included the Rainforest Alliance symbol within the ad (below) to educate consumers about DOVE’s agreement that 100% of its cocoa are from Rainforest Alliance certified farms. These “well managed cacao farms help reduce soil erosion, improve air quality, and provide a habitat for animals, often conserving remnants of once-plentiful tropical forests” (Dove Chocolate 2009). 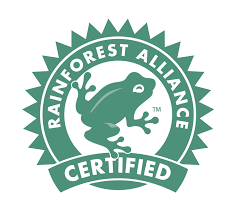 By portraying DOVE Chocolate as a way of fostering friendships and as a sustainable chocolate company, the new advertisement emphasizes its beneficial qualities rather than furthering stereotypes perpetuated throughout the modern industry. “Adverts have perpetuated western sexist and racist ideologies under a veneer of pleasurable consumption, and have divorced chocolate from the conditions of production” (Robertson 2009). Modern chocolate advertisements display a racialized and sexualized presentation of the product; the above ad suggests that humans cannot limit their indulgence and need outside assistance to resist the temptation. The ad that I proposed brings DOVE’s positive attributes to the forefront, deemphasizing the way it has been previously misrepresented by focusing on friendships instead of sexualized relationships, and on the company’s sustainable practices.

Off, Carol. Bitter Chocolate: Investigating the Dark Side of the World’s Most Seductive Sweet. Vintage Canada, 2010.