Chocolate advertisements have been targeting  women since cocoa and chocolate became available to the working classes in the nineteenth century. The chocolate companies recognized the role of women as the household’s primary decision makers and purchaser of their family’s nutritional needs. (Robertson, 2009)  The chocolate company’s advertisements have evolved over the years to adapt to the evolution of the roles that women play in society. In 2004 Godiva launched their Diva advertising campaign featuring women in the image of sexy, upper class divas holding a Godiva chocolate.  The tag line read “Every Woman is One Part Diva Much to Dismay of Every Man.” 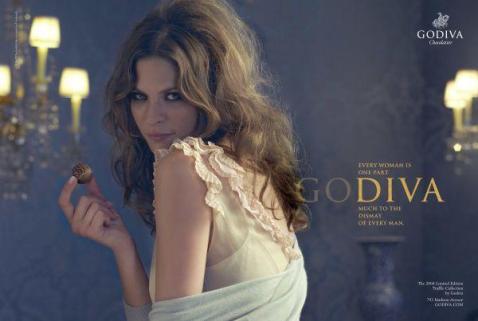 First let’s define the word Diva. According to the Merriam Webster online dictionary a Diva is a “Prima Donna or a famous and successful woman who is very attractive and fashionable.” It was a clever marketing campaign as it manipulated the brand name Godiva by separating the first two letters, Go and the last four letter Diva as a message , Go Diva to symbolize empowerment for women. The woman in the advertisement is dressed in what appears to be a sleeveless neutral colored night-gown trimmed with a few rows of lace and  a pale blue shawl or blanket is draped over the middle of her back and arm.
Her surroundings are understated however they exude elegance and entitlement.  The sparkling crystal chandelier glitters and your eye barely register the well placed antique pale blue vase that all but blends into the pale blue background. The main feature in the image is a woman whose age is somewhat difficult to determine. However, it is safe to say between 18 and 35 years of age.  She has long brown tousled wavy hair and is glancing over her shoulder straight at the camera with sultry, kohl lined eyes holding a chocolate truffle between her thumb and forefinger.  The lace on her night-gown creates a sense of feminine innocence which is in contrast to aura of post coitus satisfaction in the woman’s look.  The tag line is “Every Woman is One Part Diva Much to Dismay of Every Man.”  The Godiva Diva campaign used this tagline to send the message to women that every woman is a Diva that deserve Godiva chocolates.  No man was needed to purchase Godiva chocolates for them. The ads suggest that when you consume Godiva chocolates, you are an upper class, sexy Diva that will feel the same positive emotions that the woman in the ad exudes. Reinforcing the message “a pleasurable guilty treat to be enjoyed alone.”  (Robertson, 2009) With the Diva ad campaign Godiva continues the marketing trend that “maintains the link between women, chocolate and sex” that has been around since the 1940’s (Robertson, 2009.)

How do we push back against these advertisements that exploit gender, race and class to reach their target markets?  In my revised advertisement for the Godiva Diva campaign the imagery and tag line is modified to send the same message as the original campaign which is that while consuming Godiva chocolates you’ll feel like a Diva.

The revised advertisement is void of the blatant sexism and racism by the absence of the image of a tousled haired Caucasian woman. However, to be true to the aim of the original intended audience of  the Godiva Diva campaign I included images that refer to gender and class in the revised advertisement .  The revised tag line reads: Every woman is one part Diva so Dive In! The message to women is the same, you are a Diva and you deserve these chocolates. The main focus of the ad is the sumptuous looking assortment of chocolate truffles. Faded into the background of the image is a diamond encrusted tiara that  generally  evokes an elite class and female gender based perception. The diamond tiara sends a subtle message to the consumer that the truffles are consumed by the elite royalty perhaps a Prima Donna princess or queen. The tag line gives all women permission to enjoy Godiva truffles – Every woman is one part Diva, so Dive In.  You deserve these chocolates as much as anyone.

Chocolate companies need to get on board with advertising chocolate products to women consumers  with less blatant sexism and gender bias and realize that their message can still be heard  that all women are one part Diva and deserve to consume Godiva chocolate.