The Kit Kat Advertisement features a plethora of different people “taking a break” and relaxing.

They are in several different settings. This is to show that a Kit Kat can be enjoyed in many different places at many different times under many different circumstances as long as those eating are not doing work (taking a break). The visuals are meant to present happy people, ranging from being towed on the back of a bicycle to having a good time in the office, or in outer space, with ones child or while communicating on the internet- all this with upbeat music playing in the background. Every scene is meant to be enjoyable as the narrator helps by contributing “Here’s to all of you who love to break.” “Have a break,” the ad says over and over again. This encourages consumers to think about a Kit Kat in two different ways. It encourages them to both relax and enjoy themselves- which everyone has a strong craving to do. It also subliminally starts to associate Kit Kat with the feeling of relaxation. Furthermore, the consumer will then be more inclined to buy a Kit Kat or desire a Kit Kat when they feel happy and relaxed. This creates a positive feedback loop of desire, association, and consumption for the Kit Kat brand.

My ad titled “Gimme a break” takes the classic slogan of Kit Kat’s brand and turns it around sarcastically on the company. 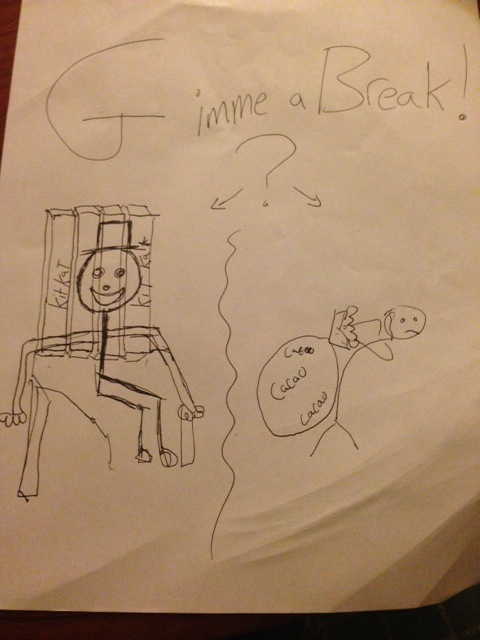 There is a depiction of a white man on a throne made from Kit Kats, contrasted with a decrepit looking farmer hauling a large sack of raw cacao beans over his back. I am asking the Kit Kat brand to “give me a break” from certain issues they present in their company that their add exemplifies. For example dealing with race, in the Kit Kat advertisement there was no minority representation. This pseudo racism is not limited to only chocolate companies, other companies do it too in fact only about 5 per cent of commercials used actors from a non white background in the UK (where Kit Kat is most popular)  (Sweeney 2011) but it is particularly relevant to the chocolate industry given its history of largely African cacao workers working incredibly long, hard hours for very little pay. Furthermore, despite the fact that they acknowledge free trade, workers rights, and the value of community development, as seen by the Nestle Kit Kat’s recent ethical certification through the fair trade quality mark;(Smithers 2009)

the brand still didn’t feel is desirable to include minority groups in their advertisement- despite clearly having somewhat of an understanding of the importance of valuing culture as seen through their recent fair trade quality mark certification. The fact that they didn’t want to show it more publicly is very peculiar and says a lot about the identity of the company as a whole. This leads me to exasperatedly exclaim “Gimme a break.” Even with the certification, Nestle’s Kit Kat is having a hard time talking about the fact that their company is dependent on workers of a certain ethnicity that wasn’t represented when the chocolate was presented to the consumer.

As a critical consumer I would push for more transparency in the company. Additionally, I have a strong desire to see the positives of the company come more to light in their public communication.