In the world of chocolate advertising, there are many problematic images that promote “prejudice, stereotyping, and discrimination on the basis of sex (Martin). Some images have become the norm when it comes to marketing chocolate as an aphrodisiac towards not only women, but class. In this blog post, I will focus and examine chocolate as an aphrodisiac which falsely discriminates on gender and class which thus leads to sociological misconceptions. This blog post juxtaposes 2 advertisements in which points out chocolate’s ad gender characteristics falsely being corroborated not only by viable links between the consumption of cacao and sexual function, but by mass cultural stereotypes.

Support for chocolate being an aphrodisiac can be noted in the many elements chocolate gives once digested by a human being. Chocolate triggers the production of nitric oxide, which relaxes and dilates blood vessels to allow more blood to flow through them, much like Viagra. Methylxanthine, another substance in chocolate can also lead to arousal because it blocks receptors for substances that constrict these same blood vessels, and as well increases the production of endorphins, which act much like morphine to reduce pain and stress and promote a feeling of well-being and euphoria (Rosch 8). 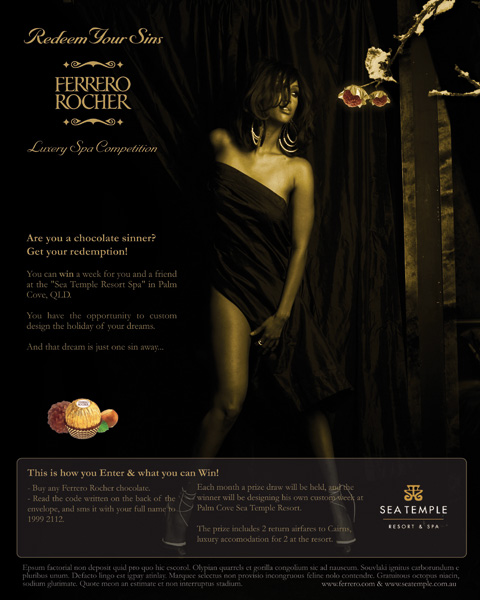 Critique of the Original Advertisement

An examination of the first advertisement entices exploration into the sensual side of chocolate with a dark undertone. The imagery seemingly invokes sensations of the most primal of nature that draws on powerful female sexual expression. The body language that is expressed by the woman reeks of raw passion. The simple positioning of both her hands, one of which is located near her private area, spells her mood and intent. It is not that the sultry clad woman is indulging in the sheer rapture of eating chocolate, but rather the insinuation that by consumption of the decadent delight will seek the effects of its spell in the arms of her paramour. This speaks volumes to the traditions of modern western culture that invoke the greatest effect, as “adverts have perpetuated western sexist ideologies under a veneer of pleasurable consumptions which have divorced chocolate from the conditions of production” such as giving the gift of chocolate” (Robertson 10). The misguided meaning we now see is: sex and chocolate go together as one is symbolic of the causal agent that will lead to undoubtedly one of the most powerful human urges. The connotation of gender roles is seen through the female desire and chocolate being intertwined together.

The sheer luxury and ecstasy that chocolate can provide creates a form of classicism that was once a barrier to what is now considered a sheer commodity to the average consumer in today’s supermarket. This does not however diminish the power of the perception of how chocolate can demonstrate itself through various social parameters. In the same category of fine wine, chocolate has the ability to be perceived as both a luxury and common commodity. It is apparent though through the cultural media in which we have observed in the world of status and class. The vivacious allure of the flawless model in the throngs of passion by ingesting a simple morsel of a deeply seductive tidbit of chocolate, may not reflect the bar of chocolate that the average person will consume at a sporting event with their family. This is the power of chocolate to not only be decisive in the most subtle way but rather to provoke the deepest of feelings in the ways we view our own society. It plays a key role in not only the perceived value of what we desire as wants and needs, but rather can be viewed as something that is far more important or even relevant, namely the power of value. There is nothing new to the essence of human beings associating themselves to external elements outside of themselves. Thus in its most unaltered state it is symbolic of the cyclical process of giving and receiving  that has been a driving force of humanity since time immortal.

This new ad was created to represents chocolate going against gender, and social class slurs. Annotating this ad carefully, one is able to see the multiple diversity and social standing of each individual. In this ad, the ethnic background is widespread from an African American, Spanish, Caucasian, and to an Indian, all together enjoying each other’s companionship. This denotes sexuality and gender in the terms that chocolate is an aphrodisiac that realistically does not really serve sexuality human intent solely, as “although numerous beneficial constituents have been identified towards chocolate being an aphrodisiac, the amounts contained are so minute that they are unlikely to have any physiological effects” (Rosch 8). Thus, an enormous amount of chocolate would have to be consumed to really gain any euphoric, or sexual effects. The ecstasy here is therefore portrayed realistically, by love, appreciation, and the equality with one another, regardless of class and gender; there is no stereotypes present. Noting the smudge marks on the Caucasian male’s shirt in the ad, and his messy hair, he represents a hard working class that is not wealthy going against the stigma that stereotypes may contribute to him of a ‘low social class’ unable to consume chocolate, while also going against the ideology that “it is the privilege of those who can afford to consume, who are distanced geographically and economically from those at the very start of the chain” (Robertson 18).

In conclusion, chocolate’s annotation of being an aphrodisiac enhancing female sexuality and class is blunt when noting that chocolates sexually enhancing elements are very weak nutritionally for the amount most people would consume. As advertisements have propagated western sexist ideologies under a veneer of pleasurable consumption, chocolate has mass cultural stereotypes that don’t have real nor healthy connotations. Further exploration on this topic of sexism can be seen in the link below. If women’s roles were plaid by men, the meaning and perception one gives will still be stereotypical, but at the same time powerful, sexist and dangerous.