From Hershey’s kisses to Snickers bars, the chocolate circulating contemporary culture tends to be sweet. Contrary to modern times, the Aztecs prepared savory chocolate drinks used for sustenance, religious ceremonies, and special occasions. Aztec people came to the Valley of Mexico by the early 1300s and, after being cast out into small islands, utilized warfare to eventually rule many parts of Mesoamerica. Cacao became integrated into the Aztec way of life following the conquest of the Xoconusco province during the late fifteenth century. 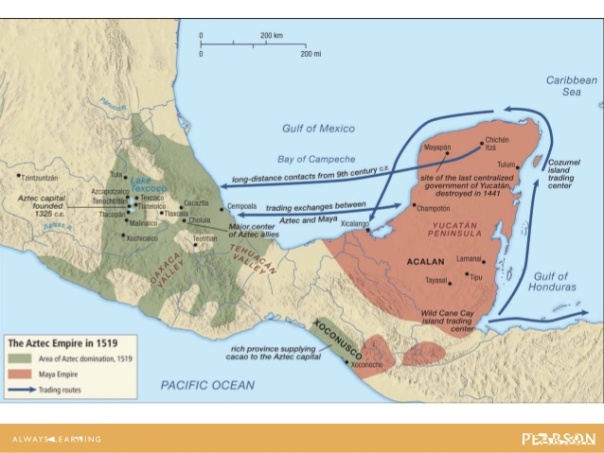 Heavy cacao production occurred in this part of southeast Mesoamerica. By the time Spaniards came to Mexico’s interior, the Aztecs had solidified a sprawling, socially stratified society thriving from the tribute required of provinces. The Aztecs had a rich, amalgamated culture drawing from the land’s natives and the extinct Mayans. In addition to the importance of chocolate in Aztec culture, a close analysis of a recipe narrated by an anonymous conquistador reveals colonialist thinking and ultimately foreshadows the exploitation of Mesoamerican lands and peoples to sustain Europeans’ hunger for chocolate during the sixteenth to nineteenth centuries.

Drinking cacao-derived beverages was reserved for elites in Aztec culture, as most likely noticed by an anonymous conquistador when he published his description of Tenochtitlan in 1556. The recipe he provided in his composition mentioned

“seeds which are called almonds or cacao are ground and made into powder, and other small seeds are ground, and this powder is put into certain basins with a point [whatever that may mean], and then they put water on it and mix it with a spoon. And after having mixed it very well, they change it from one basin to another, so that a foam is raised which they put in a vessel made for the purpose” (Coe and Coe 84).

The way chocolate permeated economic and social customs explains why the Aztecs had vessels specially made for chocolate and made sure to foam the liquid for a luxurious feel. Cacao functioned as money, a noble beverage, a sustaining drink for warriors, and a metaphor for the heart or blood, giving it use in sacrificial rituals. The recipe hints at cacao’s high status by mentioning the specialized, precious silverware involved in the formalized process. However, this recipe from the “gentleman of Hérnan Cortés” leaves out some information (84). After carefully extracting the almond-like cacao seeds from the mucilaginous pulp in cacao tree pods, they had to be fermented and winnowed from their shells. The vague “other small seeds” mentioned are most likely maize, as the plant was common in food preparation due to its versatile and filling nature. 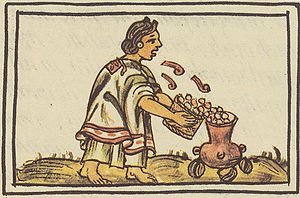 Above is an image of an Aztec “woman gently dropping shucked corn into boiling water” (Maite Gomez-Rejon 1). Maize was a crucial food item, as the woman is blowing on maize to calm it before cooking it in a fire. Unlike the hot chocolate drinks of the Mayans, the Aztecs served their cacao mixtures cold and incorporated a variety of flavors and spices. 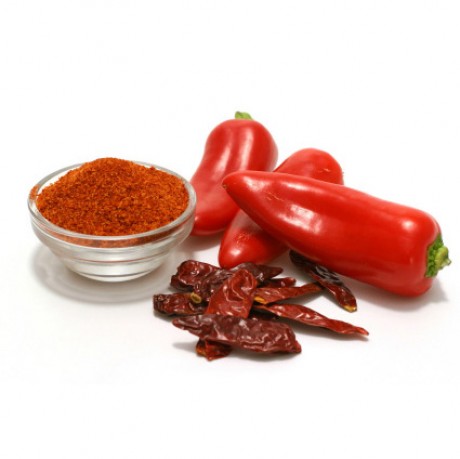 The most common addition was chili, a sharp peppery taste well-known to the Aztecs. Though other portions of the conquistador’s publication are not mentioned, the recipe cited by Coe is interesting for what it does and does not contain. Cacao’s significance is implied, but the lack of detail regarding cacao’s preparation and the type of grains or seasonings added suggest and defend a colonialist mentality.

In order to justify plundering lands, killing natives, disrupting cultures, and stealing natural resources from distant lands, European conquistadors had to label locals as inferior savages in need of civilization and Christianity. This entailed disparaging the Aztecs and trivializing their ways of life. The anonymous conquistador implies that chocolate is significant to the Aztecs, yet cannot be bothered to supply thorough information despite having ties to Mesoamerica through Cortés. He ambiguously refers to additives as “other small seeds,” leaving out the important, widespread uses of other flavorings (84). The conquistador snidely comments “whatever that may mean,” dismissing the Aztec people’s socially constructed realities and thereby encouraging his readers to do the same (84). The recipe’s cavalier tone and shortcomings in capturing Aztec chocolate traditions reflect views shared by other conquistadors. Hernán Cortés officially claimed Tenochtitlan for Spain in 1521 using violence and deception, aided by beliefs in European superiority over the Aztecs.

Cortés acted on behalf of Spain, a country that sanctioned these measures because of colonialist ideas. The anonymous conquistador, and later the Western world, praised the chocolate drink rather than the culture that created it, removing the Aztecs’ agency and shifting the focus to the product rather than the producer. A close reading of this recipe is limited by the scarce context about the conquistador and his writings, though the telling language he used has historical significance.

The rest of the recipe contains passionate praise of the chocolate drink with exaggerated language that fed into the European chocolate frenzy and justified cacao’s expansive cultivation after conquistadors destroyed the Aztecs. The gentleman of Cortés found that

“This drink is the healthiest thing, and the greatest sustenance of anything you could drink in the world, because he who drinks a cup of this liquid, no matter how far he walks, can go a whole day without eating anything else. … It is better in hot weather than in cool, being cold in its nature” (84).

Hyperbole litters his description, for while the alkaloids and caffeine provide ample energy, the maize-chocolate beverage was not the “greatest sustenance” one could drink “in the world” to sustain him “no matter how far he walks” (84). By embellishing the effects of the Aztec cacao recipe, the conquistador encourages Europeans to greedily consume chocolate. As cacao became firmly ensconced in European appetites, forced labor disrupted indigenous populations and tied them to perpetual debt as they tried to keep pace with demand. The conquistador comments that the drink is “cold by nature” to classify the drink according to the humoral theory of disease and nutrition that was popular in Europe until the 1800s (84).

According to the system, health “depended on a proper balance among four bodily humors” – blood, black bile, yellow bile, and phlegm  (Presilla 27). An example of achieving this stability is to “correct excessively ‘warm’ and ‘dry’ tendencies” through “doses of ‘cold’ and ‘moist’ foods” (27). The Aztec chocolate drink had to fit into this humoral theory in order to be adopted by Europeans, so its designation as cold asserts its place in the Western world and gives Europeans more reason to eagerly consume it at the expense of Mesoamerican peoples and lands. Alternatively, this classification empties the drink of the intrinsic meanings it had within the community that created it in order to fill the beverage with palatable European ideals.

The limited analysis of the Aztec cacao drink recipe provided by an anonymous conquistador exposes a harmful colonialist worldview. Through dismissive comments, a contemptuous disregard for the full picture of Aztec life, and exaggerations of the drink, the conquistador sheds light on beliefs that justified colonial ventures. Chocolate’s relationship with European violence is a horrifying reality evident in the sixteenth century retelling of an Aztec recipe.