What catalyzed the relocation of the world’s cacao cultivation from Central America to the West African coast? 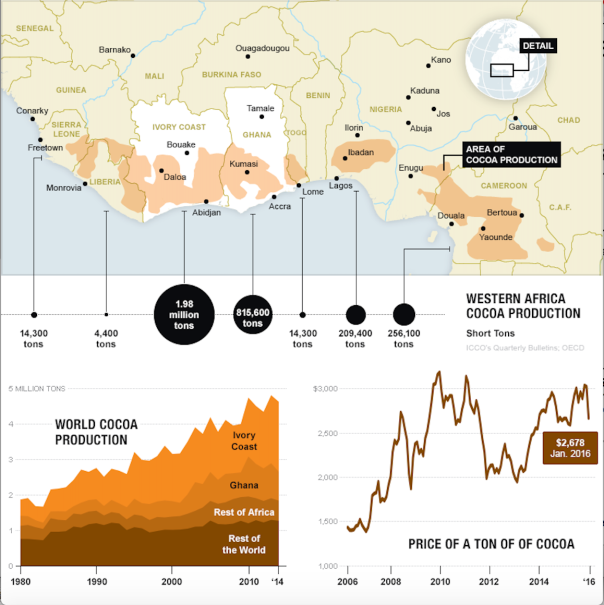 Although cacao and chocolate are native to Central America, 70 percent of the world’s cacao is produced in Africa. According to a 2012 cacao market report, the majority of cacao is specifically produced in West Africa, with the Ivory Coast and Ghana as the leading producers of cacao, respectively (Presilla, 2009:123). The Ivory Coast and Ghana are followed by Indonesia, Nigeria, Cameroon, Brazil, and Ecuador, respectively (Coe and Coe, 2013:196-197). The relocation of the world’s cacao cultivation from Central America to the West African coast was catalyzed by 1) the transformation of cacao cultivation into a for-profit venture by European colonial powers and 2) the Portuguese transportation of Forastero cacao to West Africa.

Cacao’s Journey Across the Equator

Cacao trees thrive in the climate conditions existing near the equator, between 20 degrees north and 20 degrees south (Presilla, 2009:44). Because the cacao trees need a hot climate, rainfall, and little fluctuation in temperature, only a select number of countries are capable of producing cacao.

Modern scientists locate the genetic origins of the cacao tree in South America, specifically in the Amazon River basin and in modern-day Venezuela (Presilla,2009:8).

By the second millennium BC, the seeds of cacao trees native to South America were brought northward to Mesoamerica, or the modern-day area between Mexico and Honduras, including Guatemala, Belize, and El Salvador (Presilla, 2009:8). From the Olmec to the Maya and the Aztecs, the chocolate mixtures were used to prepare hot and cold beverages (Presilla, 2009:8). Initially, natives had cultivated cacao trees to consume cacao as a fruit, but over time, natives discovered that the seeds could be dried, fermented, and ground to create chocolate mixtures.

Until Christopher Columbus arrived in Mesoamerica in the sixteenth century, no European had encountered cacao. Although Columbus returned to Spain from the New World with cacao beans, the Spanish would not taste chocolate until 1544 when the beverage was presented to the future Phillip II by a delegation of Kekchi Maya.

Upon taking up the drinking of chocolate, the Spanish made cacao cultivation a for-profit venture in its colonies. (Presilla, 2009:24). Hence, cacao was transformed from a barter item into a cash crop in Mexico, Guatemala, Honduras, Nicaragua, and El Salvador (Presilla, 2009:28). The cultivation of cacao as a cash crop required an immense amount of labor. In the beginning, indigenous peoples worked the cacao plantations, but their populations would be decimated by disease introduced by the Europeans (Presilla, 2009:28). Cacao production could not keep up with a rising demand for chocolate, especially as chocolate-drinking spread through Europe. Within 50-60 years, the practice of drinking chocolate had spread to France, Italy, and England (Presilla, 2009:24).

The Search for New Markets for Cacao Cultivation:

To meet demand, the Spanish relocated primary cacao cultivation from Mesoamerica back to Venezuela by the seventeenth century (Presilla, 2009:28). Here still, the challenge of insufficient labor to work the cacao plantations in Venezuela and South America persisted. As a result, slave labor from Africa was imported to keep cacao cultivation profitable in the colonies.

To further increase the production of cacao, the Spanish brought cacao to its eastern colonies, including the Philippines, Java, Indonesia (Presilla, 2009:43).

Other European colonial powers desired to similarly profit from cacao cultivation in their colonies. In the New World, the Portuguese ruled over Bahia, or modern-day Brazil. The Portuguese took Lower Amazon cacao seeds from Bahia to West Africa in the nineteenth century (Presilla, 2009:43). Cacao cultivation continued to spread from Portuguese West Africa to modern-day Ghana, Nigeria, Cameroon, and the Ivory Coast by 1905 (Presilla, 2009:43; Coe and Coe, 2013:197). The British spread cacao to modern-day Sri Lanka, and the Dutch spread cacao to Java and Sumatra. By the 20th century, Europeans brought cacao to the New Hebrides, New Guinea, and Samoa in Oceania (Coe and Coe, 2013:197).

The Rise of West African Cacao

Colonialism spread cacao seeds across the equator, but West Africa, in particular, became the largest producer of cacao because it is the primary region where Forastero cacao grows. Crucially, the Portuguese had brought Forastero cacao from Brazil to Sao Tome (Coe and Coe, 2013: 197). Although Brazil also grows Forastero cacao, cacao production declined in the 1950s following the devastation of cacao-producing regions by witches’ boom and black pod rot (Presilla, 2009:123). Modern-day chocolate corporations favor Forastero cacao because its disease-resistance makes it the more dependable, cost-effective cacao to source relative to the other two major breeds of cacao: Criollo and Trinitarto. As reflected in the 2012 cacao market, the business practices of modern-day chocolate corporations who source cacao from West Africa, where Forastero cacao thrives, reinforce the profit-driven cacao cultivation established during the colonial period: 80 percent of the world’s cacao is of the disease-resistant Forastero variety (Coe and Coe, 2013:197). 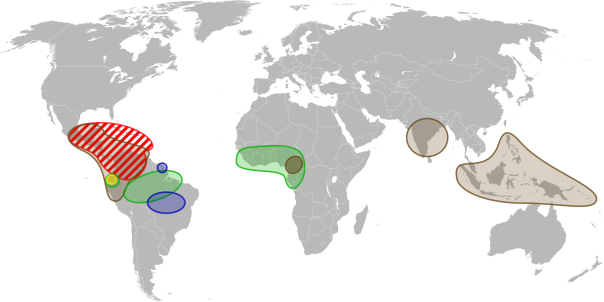 Profit Above All: The Case of Cadbury

Nearly a decade after first learning of the inhumane labor conditions on the islands passed before Cadbury would officially boycott cacao from Sao Tome and Principe in 1909 (Higgs, 2012:148). Notably, his decision was preceded by his acquisition of fourteen acres in the Gold Coast, or modern-day Ghana, to be used for a Cadbury factory (Higgs, 2012:148). Despite having sufficient evidence for the inhuman labor conditions years before, Cadbury waited to boycott cacao from Sao Tome until he secured an alternate source of cacao for his company.

Although American chocolate corporations immediately filled the void left by the British boycott of Sao Tomean cacao, cacao production in Sao Tome eventually fell. The island’s cacao-producing regions were affected by swollen shoot disease in 1918 (Higgs, 2012:160). Since, Sao Tome and Principe have been unable to compete with the Ivory Coast and Ghana, chocolate corporations’ primary suppliers of cacao (Higgs, 2012:164). Ultimately, the profit venture begun by European colonial and the Portuguese transportation of disease-resistant Forastero cacao to West Africa primed the West African coast’s economies to flourish through cacao cultivation.