Over the years, chocolate has been adapted to suit various different roles. Starting from ancient Mayan rituals where chocolate signified religious and social values, to current global marketing efforts and political agendas, the use of chocolate as a tool has been shifting for centuries. However, chocolate has come to symbolize peace in twentieth century war zones and conflict contexts as diplomatic military gestures; efforts of which remain till this day.

One of the most prominent examples of chocolate diplomacy can be seen through the story of Operation Little Vittles, which was established in 1948 during the Berlin Airlift. The photo below is of Gail Halvorsen, or more popularly known as the Berlin Candy Bomber, the mastermind behind Little Vittles.

Operation Little Vittles started in Germany, when Halvorsen noticed a group of thirty children standing against barbed wire in Tempelhof, as he was filming on his day off. While talking about it on “Candy Bomber”, an episode by PBS, he remembers when he first encountered the children. He says: “these kids had no gum, no chocolate for months, not enough to eat, and I suddenly realized not one of thirty kids had put out their hand”.(Halvorsen, 2014) This then triggered him to say, “hey these kids would like some chocolate”.(Halvorsen, 2014) He then reached into his pocket and all he had were two sticks of double mint Wrigley’s gum. Expecting a brawl after sharing the gum with the children, Halvorsen was shocked when there was no fight. In fact, he recounts, as seen in the video, “the kids that didn’t get any gum, took that piece of paper and held it up to their nose, and smelled, and smelled. Smelled the piece of paper”.(Halvorsen, 2014) He stood there dumbfounded. That was the moment when he said to himself, “Boy! I gotta do something for these guys!”.(Halvorsen, 2014) Next day, Halvorsen went back and delivered bags of candy by attaching them to small parachutes, and dropping them from his C-47. Children gathered and watched from the airfield below as bags of candies floated towards them. And thus, began Operation Little Vittles, an initiative that was carried long after Halvorsen returned to the United States of America. The event marked the establishment of a unique diplomatic role of chocolate, one that could bring joy and peace in a war zone. It showed that the act of giving chocolate has the ability to go beyond war, enemies or allies. 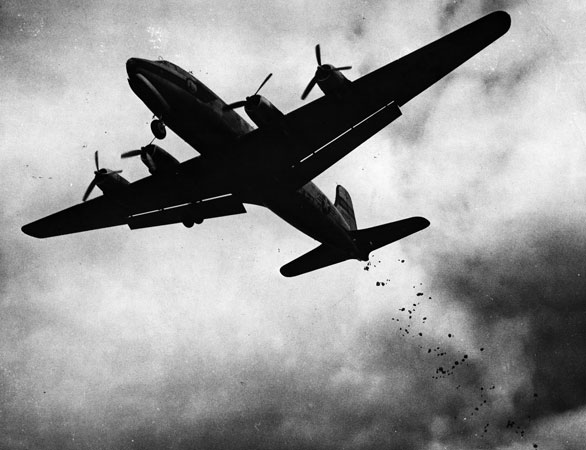 While Operation Little Vittles occurred during World War II, prior to, and after that, various other events have occurred in World War I as well as in recent times, that exemplified chocolate diplomacy. Operation Little Vittles showed efforts of humanitarian acts by the military for the civilians on enemy grounds, however, there have been instances where interactions within the military itself showed signs of peace through the language of chocolate.

During World War I, in 1914 on Christmas Day, the British and German Army stopped battle for a day on the Western Front, an event that came to be known as the Christmas Truce. The soldiers interacted and exchanged chocolates, gifts and even played football with each other in hopes that the war would not resume the next day. “As Lieutenant Johannes Niemann, a Saxon who served with the 133rd, recalled that on Christmas morning” (Dash, 2011), he grabbed his “binoculars and looking cautiously over the parapet saw the incredible sight of our soldiers exchanging cigarettes, schnapps and chocolate with the enemy”(Dash, 2011).

Above is a painting, an artist’s depiction of the Christmas Truce. It was originally published in The Illustrated London News, in January 9, 1915. The illustration shows fraternizing efforts on no man’s land during the season of peace, hope and goodwill. During the Christmas Truce, the exchange of chocolate is seen as an agreement to peace. It goes beyond the act of kindness during war, to effectively becoming a symbol for halting the battle itself.

A similar act, in recent times, has been seen at the border of India and China in June, 2015. As outlined by an article from India Today, Chinese troops had stepped into Indian territory in the northern region of Arunachal Pradesh which led to some tension as minor scuffles unfolded. However, the Chinese officials then offered chocolates as a gesture of peace to the Indian People’s Liberation Army (PLA)  to settle the matter. (Sandhu, 2016) In this instance, chocolate was used in the military milieu as a settlement. Chocolate, then, once again became an active tool for political and military diplomacy to maintain peace in the region.

All three incidents, spanning over a hundred years, from World War I to June 2015, show the changing role of chocolate in political military contexts.  In the case of Operation Little Vittles, chocolate plays a more passive role as an act of peace and as an act of kindness, providing subtle political message showcasing the goodwill of the American Army during war. However, during both the other instances, chocolate takes on a more active role and acts as an effective tool to physically symbolize an agreement and a settlement that shows peace.

Davies, Caroline. Children to mark WWI’s ‘Christmas Truce’ with plays and football. The Guardian. May, 2014. https://www.theguardian.com/world/2014/may/09/children-mark-first-world-war-christmas-truce-plays-football