The chocolate prevalently consumed today isn’t the chocolate known to the ancient Mesoamericans, or elite Europeans of the past. What was once a rich, decadent drink of the wealthy has now become a common confection, easily attainable by all members of our society. Due to the many innovations introduced during the Industrial Revolution, now most readily available chocolate is heavily processed and adulterated with sugar.

The chocolate the Mayans and Aztecs sipped was made by a process of grinding roasted cacao seeds until they formed chocolate liquor. This bitter, fatty liquid was mixed with corn flour, a little water, and some spices to add flavor.  A similar process was used in Europe when the Spaniards first brought back cacao seeds from the New World in the 1500’s. “For many years cacao beans were roasted and ground into a thick, grainy paste (cacao mass or liquor), by methods differing very little form the pre-Columbian metate grinding…”(Presilla, 2009, p. 30). Pictured below is a metate, the grinding stone that would be heated and used to grind cacao seeds. 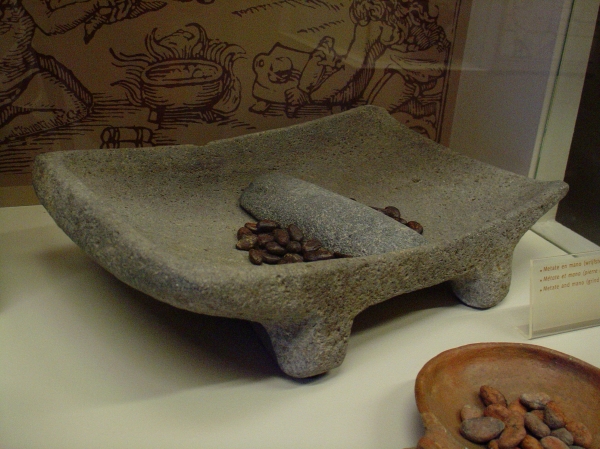 As chocolate gained popularity throughout Europe, its target audience remained the same. “It had been an elite drink among the copper-skinned, befeathered Mesoamericans, and it stayed that way among the white-skinned, perfumed, bewigged, overdressed royalty and nobility of Europe” (Coe & Coe, 2013, p. 125). Several inventions in the 1800’s would eventually change chocolate’s status as an exclusive drink, to a low-cost food.

This change was first precipitated in 1828 by Conrad Van Houten from the Netherlands. Van Houten devised a way to use a hydrolyzed press in order to extract the cacao fat from chocolate liquor; leaving both cocoa powder and the cocoa butter. Cocoa powder was quicker to turn into hot chocolate than the traditional method, and the cocoa butter had many uses, such as making soaps. He further invented an alkalizing process which helped to make less acidic, smoother tasting cocoa powder (Presilla, 2009, p. 40). 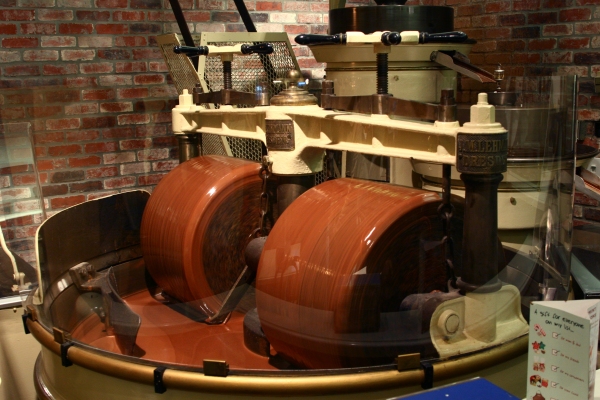 Pictured above is a modern day version of a machine introduced during the industrial revolution, the Melangeur. This is a large mixer used to combine ingredients into a uniform dough. This added greater consistency and speed to an otherwise laborious process. In 1879 Rodolphe Lindt, of Switzerland, developed a machine to take the smoothing and combing process one step further. With his conching machine all grittiness could be removed and a truly smooth, melt in your mouth, solid, chocolate was created. During that same year another Swiss inventor, Daniel Peter, came up with the process of adding dried milk (Prescilla, 2009, p. 41).

Through trial and error, a self-stable bar chocolate was made from conching cocoa, sugar, cocoa butter, vanilla and dried milk. The end result was a product that could be made inexpensively on a very large scale. As the price went down, the demand rose. This new form of chocolate could not have been mass produced so cheaply without its main ingredient; sugar. Mintz (1987) tells us sugar changed from a luxury of the wealthy to a dietary staple of the poor in Britain (p. 133). Pictures below are sugar cane workers on the island of Jamaica in the 1880s. As sugar consumption increased in staggering rates in Europe and North America, the need for affordable mass labor led to slavery. Even after slavery was abolished, the working conditions of laborers on plantations was terrible.

The strong consumer demand in our society for ever more sweet treats has led chocolate manufacturers to look for ways to continue to make mass produce quantities of chocolate for as little money as possible. Of course this has resulted in paying sugar and cacao farmers as little as possible. Historically, before food and drug regulations, this also meant a free for all on adding cheaper ingredients into chocolate (Coe & Coe, 2013, p. 244).  Large scale chocolate making meant, and continues to mean, a reduction in overall chocolate quality.

Before chocolate became the conched bar of sugar, dried milk and cocoa we know of today, the quality of beans used mattered a great deal. The most prized beans came from the variety called Criollo. This name has lost significance outside of niche markets due to the nature of modern chocolate making. Many things can go awry when making cacao ready for eating. Not only do varies varieties, namely forastero, potentially have a less ideal flavor, issues can arise during growing, fermenting, drying and roasting. Van Houten’s alkali treatment and conching can both help salvage imperfect beans (Presilla, 2009, p. 41). The high amount of sugar can also help mask unpleasant flavors. After the Industrial Revolution Priscilla (2009) notes “Even excellent chocolate had become faceless and anonymous, for the great majority of consumers had no way of seeing and judging the cacao from which it was made (p. 41.)

Chocolate was once a fine crafted drink of elite Mesoamericans. Then cacao traveled to Europe, and for many years, was kept in the same tradition of being sipped by the upper class. Innovation, and an unfortunate acceptance of slave labor, allowed chocolate during the Industrial Revolution to be transformed. It became a common, edible food available to all of our society. The origin and quality of the ingredients has become unknown to the average consumer. Today most think of chocolate as a highly sweetened candy. This has not always been true. Chocolate had a different life long before industrialization.