Food and religion have been inseparable companions. The Ancient Egyptians gave offerings of food to the gods. The Chinese did the same with their ancestors. And the Hindus offer prasad (offerings) in their temples. These foods consisted of items as diverse as fish, stews, dumplings, coconuts, milk, and sweets.

Food was also offered to the gods in Mesoamerica, in what is now Mexico, Guatemala, and Nicaragua. One of these “foods” was blood, but another, more prominent offering was cacao. Perhaps no other aliment has had such a profound place in a culture as cacao has had in Mesoamerican society. Documents such as the Dresden Codex and the Popal Vuh generously mention cacao in various instances. For example, the Dresden Codex shows the god of sustenance and maize, K’awil, holding a vessel containing cacao beans. The inscription states “K’awil [and] the maize god’s sustenance [is] cacao. An abundance of food” (Vail). What is particularly interesting about this inscription is that not only does it equate cacao with abundance, but with abundance for the god of maize.

Basically, cacao supersedes maize in spiritual and gastronomic significance. And for the Aztecs, cacao was sometimes “a spur to conquest” (Presilla 17), for it was not native to their environment and would not anyway grow in the highlands of central Mexico. The Aztecs extracted tribute from conquered peoples further south, and cacao figured prominently in this. The 16th-century Codice Mendoza, an Aztec ethnography probably commissioned by Don Antonio de Mendoza, the first viceroy of New Spain (formerly the Aztec Empire), elaborates on this by mentioning that 200 loads of freshly harvested cacao (or 4,800,000 beans) and 800 drinking gourds were sourced from the Xoconochco/Soconusco region, in what is currently the southern Mexican state of Chiapas.

What can be ascertained from these sources is that cacao was the most important food for the Mayans and Aztecs. The question then is what was so special about cacao that it merited such an esteemed place in their societies?

The word cacao, or cocoa in the Anglicized context, derives from the Maya kakaw, which “has its origins in the Mije-Soquean language family” (Presilla 9), of Mexico. Variants of this term, such as kakawa, can be found be found in similar Mesoamerican languages. And the word “chocolate” originates from the Aztec/Nahuatl chocolatl, which became the Spanish chocolate, which became the French chocolat, and the English chocolate. Cacao was also given the name Theobroma cacao, or “Food of the gods” cacao, by the 18th-century Swedish botanist Carl von Linné, more commonly known as Carl or Carolus Linneaus.

Now, what makes cacao such an interesting case study is that it is one of most demanding crops to grow. It can only grow within 20 degrees north and south of the equator. It needs a moist environment, and the lands of Venezula and Peru-the homelands of cacao-provided ample moisture for its cultivation. It is also a very labor-intensive crop. Even the cacao tree itself “usually takes about four years to start bearing, though some varieties are ready at three, or even two” (Presilla 99).

Cacao is also known for its many health benefits. For one thing, it contains antioxidants, which are known to lower the risk of heart disease and improve skin. Cacao also contains theobromine, a diuretic which can help relieve constipation, and caffeine, which is known to stimulate the mind. And cacao also contains the organic chemical compound coumarin, “which has appetite-suppressing, blood-thinning and anti-tumor properties” (Evans). Now, the Mayans and Aztecs were probably not aware of antioxidants, theobromine, caffeine, and coumarin in the modern sense, but they certainly must have noticed the side effects of cacao consumption. It comes as no surprise then that cacao was provided to Aztec soldiers as a precursor to modern-day energy bars.

And it must have taken a lot of energy to grind roasted cacao beans on a metate while adding just the right amount of water, in order to create chocolate liquor, which the Mayans and Aztecs mixed with water, spices, maize, and sometimes honey, to create a frothy beverage fit for godly consumption. Indeed, the frothy layer on top was the most valued aspect of the drink. And cacao was also used as a flavoring in stews and other dishes.

It therefore makes sense that a food that takes so much effort to grow and to prepare, and one that is so versatile, would be deemed fit for religious offerings. This aspect of cacao is observed in Europe as well. Famed traveler Rick Steves talks about this during the special holiday episode of his show Rick Steves Europe, “European Easter” (which first aired on February 23, 2016). In it he explains how chocolate Easter eggs are given as gifts in Italy. The eggs themselves range from simple confections to elaborate objets d’arts. 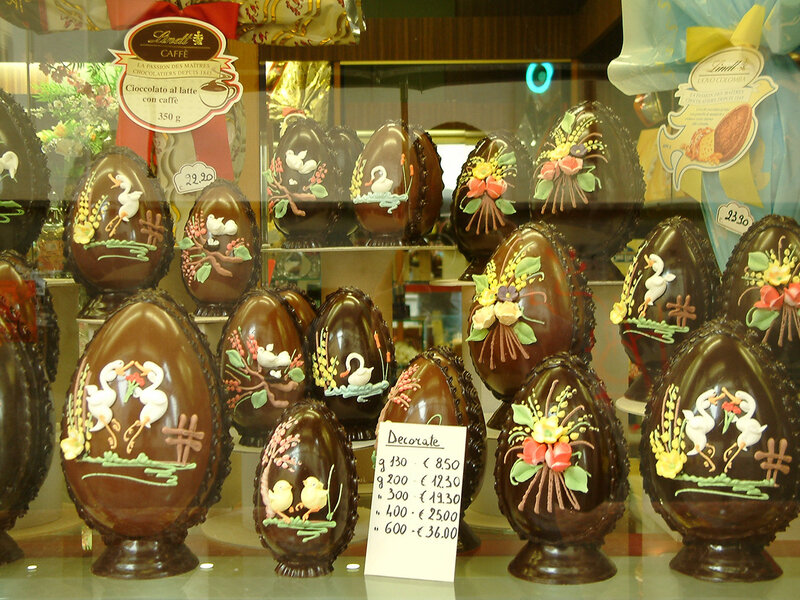 Each egg is beautifully wrapped, and customized eggs often include surprises such as miniature toy cars, car keys, or necklaces. It is a beautiful tradition that blends the pre-Christian concept of eggs as fertility symbols with the Mesoamerican tradition of using chocolate in religious rituals. And since Easter comes after Lent, the Catholic period of abstinence from worldly pleasures, chocolate Easter eggs can contextually be thought of as rewards.

The opposite, however, is the case in the 2000 Lasse Hallström film Chocolat, starring Juliette Binoche, Johnny Depp, Lena Olin, Alred Molina, Judi Dench, and the legendary Leslie Caron. In the film, Vianne Rocher (Binoche), comes to a provincial French town where she opens a chocolaterie, or chocolate shop, just as Lent is about to begin. Whereas chocolate is not deemed sinful in Mesoamerica, it is in a pre-Lent, Catholic context. Vianne tries to “rekindle the passion” in this town, and because of this she is at odds with the town Mayor, Comte de Reynaud (Molina). As it turns out, his wife has left him, and his breaking down by giving into the temptation of chocolate symbolizes his repressed humanity being unleashed.

To the Mayans and the Aztecs, offering chocolate the gods cacao was symbolic of the desire and longing of worshippers for a better life. From its origins in South America, to its cultivation in Southern Mexico, to its use in religious offerings, and to its consumption in Europe, cacao has come a long way. The link between cacao and religion makes sense in that something so special deserves to quite literally be offered on a pedestal. Religion, it can be argued, is a way of life. And what better way to symbolize that life than with cacao, something that has meant and continues to mean so much for so many people. Vail, Gabrielle. “The Food of the Gods: Cacao use among the Prehistoric Maya” http://www.mexicolore.co.uk/maya/chocolate/cacao-use-among-the-prehispanic-maya. August 1, 2014.