In modern American society, the association between chocolate and gender is evident in everything from advertisements depicting women as lustful consumers to packaging portraying colorfully dressed little girls in search of a sweet treat. The gender norms surrounding this food have a long history dating back to Mayan civilization; this history reveals that gender roles have fluctuated over time, but have continually reinforced a hierarchy in which women are subordinate to men.

The consumption of chocolate in Ancient Mayan society was intended to be a highly social event. According to The True History of Chocolate, chocolate was consumed at banquets, weddings, baptisms, and other events of societal significance which brought the community together (Coe and Coe). There was even a name for the action of drinking chocolate together, chokola’j. However, within these social events, the production and consumption of chocolate remained highly divided along gender lines. Women were seen as the primary preparers of chocolate, evident in the image of the Princeton Vase below, as the female figure in the bottom right corner is pouring the liquid in order to create the froth, which was seen as the spiritual component of the drink. The men, in contrast, are portrayed as the consumers of the chocolate once it has been prepared by the women. By portraying them as the consumer, the artist of this painting sets them apart as the beneficiaries of the divine qualities of the chocolate drink.

In the following image, a sculpture features a Mayan soldier clad not only in armor and headpiece, but with cacao pods sticking out from his chest and arms. This conformed with the Mayan belief that cacao would increase your energy, closely allying that food with the image of strength and triumph. While there is speculation over whether the depicted figure is a soldier or partaker in an athletic contest, it is clear that there is a connection between cacao, strength, and masculinity.

In the modern era, some aspects of the gender roles surrounding chocolate have remained the same as in early Mayan society, while others have changed. While men were portrayed as the primary consumers of cacao, in contemporary society the role has since shifted to women. This is especially apparent in the gendered advertising of chocolate. For instance, the following advertisement explicitly makes the connection between women, chocolate, and seduction. The ad features the ball of Lindt chocolate within the lipstick-red lips of a woman, proclaiming the company’s mission to be “mastering the seduction of smooth.” The advertisement both identifies the female as the consumer, and, by so closely linking the female with the decadent chocolate, associates her with the commodity. This is but one example in the breadth of promotional advertising that objectifies and sexualizes women in order to sell a product.

As the perceived consumer of chocolate changed from Mayan society to the modern day, the characteristics associated with chocolate changed as well. When consumption of chocolate was portrayed as masculine in Mayan society, it was heavily associated with spiritual power, divinity, and purity — it was “the food of the Gods.” However, with the consumption of chocolate portrayed in the modern era as feminine, the food is now linked with indulgence, sin, and temptation. This association of women with sin dates as far back as Greek mythology, with Pandora giving into temptation and opening the vase of evils that continue to plague the world; or the Bible, with Eve committing the original sin and setting into motion the Fall of Eden. As Russell Belk and Janeen Costa write, perceptions of chocolate consumption affirm “the broader stereotype that women are the consummate consumers of the Western world” (qtd. in Coleman 179), a trope whereby femininity is associated with consumerism, sinfulness, and sexuality.

In the 21st century, we have entered an age of greater awareness surrounding issues of sexism in society. This has widened the debate regarding the gendered portrayal of chocolate consumption in society, a debate that chocolate companies themselves are now beginning to engage in. The following advertisement by Cadbury was published in response to a controversial advertisement released by Snickers Australia that attempted to combat sexism but ended up including traditional stereotypes. This Boost Nuts advertisement, in turn, attempts to brand itself as combating sexism the right way with the hashtag #sexismisnuts. In contrast to traditional advertisements, it associates chocolate with masculinity rather than femininity by using phallic language and imagery. Despite this reversal, it continues to identify the primary consumers of chocolate as women. While this shows effort on the part of Cadbury to label and call out sexist advertising, it doesn’t completely eliminate it. It additionally raises the question: would it be too much to ask to remove gender entirely from our conception of chocolate? 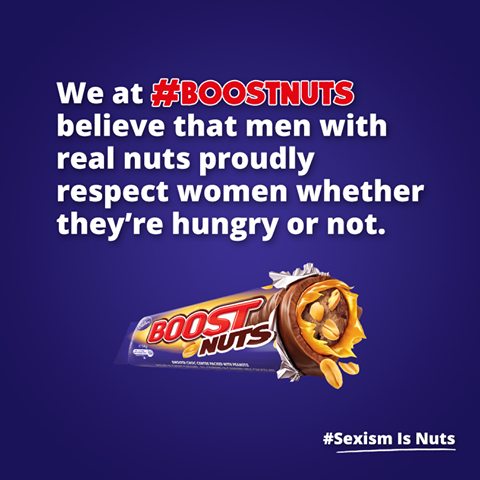 As Deborah Lupton writes, food, “as a commodity, is consumed not simply for its nourishing or energy-giving properties … but because of the cultural values that surround it” (qtd. In Coleman 179). Chocolate specifically has held a central role in global societies, from serving as a fixture of social gatherings in Mayan culture to maintaining a constant presence in every grocery store in 21st century America. In addition, by consuming these commodities, Lupton continues that “those [cultural] values are transferred to the self,” rendering these foods “central to the development and articulation of subjectivity” (qtd. In Coleman 179). Throughout history, these cultural values that we have consumed through chocolate have continued to enforce implicit gender norms. It is critical that we assess these gender norms at the most basic level of food, by thinking critically and speaking out about the chocolate that we consume.

Lupton, Deborah (1996), Food, the Body and the Self, London: Sage Publications.