Climate Change is when long term weather patterns are altered, though this can occur naturally within ecosystems, it can also be caused by human interaction with the environment. The ramifications of future climate change on the cacao industry are devastating. The specific effect of increasing global temperatures will be discussed within relation to those most affected by it within the cacao production chain; small farmers. It is only through study and education that cacao cultivators can learn to plan and adapt to the ever increasing chaos that is climate change.

Theobroma Cacao (cacao tree) is endemic to the tropical area from Southern Mexico to the Amazon basin. Cacao is geographically sensitive, having a limited growth region between 20 degrees latitude north and south of the equator. However, as cacao production globalized, the vast majority is now farmed in a small range 10 degrees north and south of the equator. Cacao is a very sensitive crop and for it to successfully grow many conditions must be met within the ecosystem including high humidity and a short dry season. Consistent temperatures between 21 and 23 degrees Celsius are required in a region with high rain and nitrogen rich soil (Lecture Notes). Ultimately, rainforests and tropical wet environments are where cacao flourishes. The difficulty of growing cacao is what makes it such a valuable asset. Historically, it was the difficulty in attaining cacao from the new world that made it such an important social commodity within Europe.

In 1896, a Swedish chemist Svante Arrhenius proposed the theory of global warming. He hypothesized that increases in carbon dioxide (CO2) within the atmosphere would increase the temperature on the planet’s surface. He concluded that the industrial revolution and its use of fossil fuel burning was significant enough to Earth’s environment to cause global warming. Since Professor Arrhenius proposed the idea of global warming, there has been a 1.7% increase in annual global temperature and air quality has the highest carbon dioxide levels seen in 650,000 years.

Centuries of exploitation and experimentation, led to Theobroma Cacao being transplanted globally to where the leading producers of cacao are now Côte d’Ivoire, Ghana, and Indonesia. Côte d’Ivoire and Ghana in Western Africa produce more than half of the world’s chocolate. However, research shown in the Intergovernmental Panel on Climate Change (IPCC) indicates that, those countries will experience a 3.8°F (2.1°C) increase in temperature by 2050, and a marked reduction in suitable cultivation area (Laderach et. al). 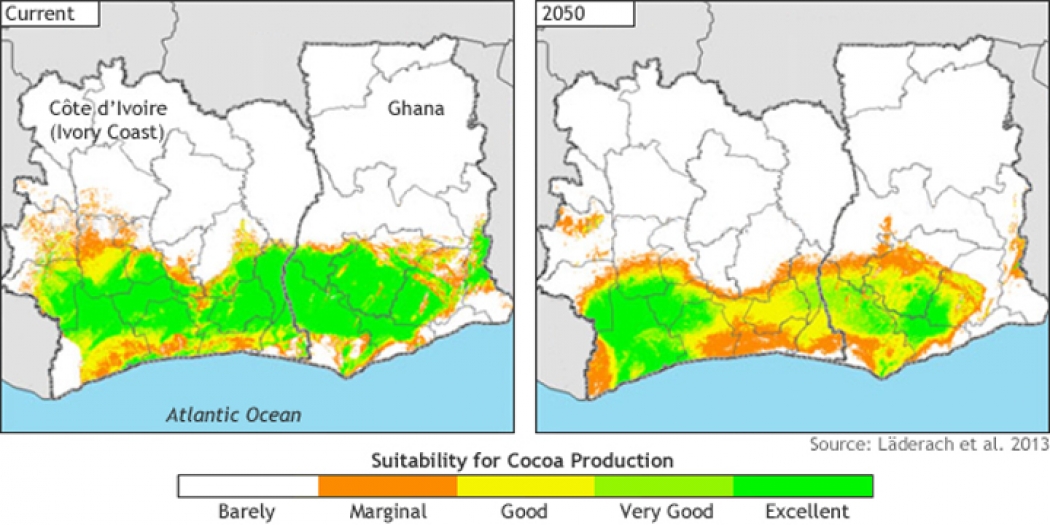 As seen in the maps above, by the year 2050, increasing temperatures will push the suitable cacao cultivation areas uphill. The IPCC reported that Côte d’Ivoire and Ghana’s optimal altitude for cacao cultivation is expected to rise from 350–800 feet (100–250 meters) to 1,500–1,600 feet (450–500 meters) above sea level (Laderach et. al). Ironically, it is not the increase in surface temperature associated with global warming that will affect cacao production, but rather evapotranspiration.

Evapotranspiration is the loss of water that occurs from the processes of evaporation and transpiration. Evaporation occurs when water changes to vapour on either soil or plant surfaces, transpiration is the water lost through the leaves of plants. The danger to cacao production comes from increasing evapotranspiration, the higher temperatures projected for West Africa by 2050 are unlikely to be accompanied by an increase in rainfall, according to standard carbon dioxide emissions scenarios. Ultimately, as higher temperatures squeeze more water out of soil and plants, it’s unlikely that rainfall will increase enough to offset the moisture loss.

The majority of global cacao is produced by small landholders, meaning those owning less than five acres. Côte d’Ivoire and Ghana in Western Africa have over two million cacao producing farmers, all succeptible to the fluctuating price of cacao. Climate change threatens the health and local economy of farmers who depend on income from cocoa for survival. The inherent risks associated with cash cropping (physical dangers to self, lack of regulation) are faced by cacao producers.

In a geographic area where climate change will be exceptionally disruptive, cocoa covers over 5 million acres in Cote d’Ivoire and 3 million in Ghana, more than anywhere else on the globe (Ruf et al). Due to the small land size of privately owned farms, production is predominantly only cacao leaving the farmer vulnerable for hunger as no other crops are produced. The remote location of the farms limits much needed access for improvement. Meaning, the lack of access to a proper infrastructure decreases the possibility of higher cacao production. Farmers do not have access to tools needed for improvement; equipment, seedlings, transportation. Cacao is labour intensive, from seedling to packaged treat. A major problem affecting cacao producers is finding suitable labour. As cacao is grown in mostly third world countries, there are third world problems. One being, the exodus of youth from rural to urban areas which leaves an aging farming population with nobody to continue the family tradition.

The timeline to produce cacao beans is 3 to 5 years. The ever increasing demand for chocolate within Europe and North America (11 pounds consumed annually) outweighs the amount that will be able to be produced due to climate change. RESULTS = CHOCOLATE SHORTAGE

Climate change vastly alters cultivation conditions. In West Africa, for cacao production to survive in the future it needs to be relocated to a more rugged or low mountainous terrain. Though that sounds like a simple solution; move the farms, it is an impossibility without disrupting the cultural, social and economic lifestyles of millions of people. In Ghana, the perfect future growing conditions will be located in the Atewa Range (a protected reserve) where farming is prohibited. A true dilemma for Ghana farmers; illegal deforest to grow cacao or preserve the nature reserve for future generations?

What is ironic is that the deforestation experienced in West Africa, specifically Côte d’Ivoire, was somewhat based on creating cacao plantations. Cacao has been referred to as a pioneer crop; something grown after the forest has been cleared. Instead of replanting aging and dying plantations, many farmers found it easier to migrate to the edge of forests and start new plantations. During the second half of the twentieth century, the cacao frontier moved from the drier east to the wetter southwest of the country, a migration fueled by massive immigration of prospective cacao farmers from the Savannah (Ruf et al). With rampant poverty running through West Africa, little consequence is given to environmental concerns when personal and familial survival is at stake.

Education is needed for cocoa farmers to adopt climate-smart agriculture (CSA). These are practices that foster resilience to climate change while sustainably increasing cocoa productivity. The private sector plays an integral part in the long-term sustainability of the cocoa sector and action is needed to further their investment and engagement in measures that will enable farmers and the industry to adapt to pressures from climate change (deGroot).

There are ways of protecting cacao from current and impending climate change; one is to have companion trees. Cacao trees can be protected from high temperatures by planting companion trees such as banana or plantain. If properly spaced and maintained, these trees can protect cacao from soaring temperatures. This method of farming can reduce cacao leaf temperatures up to 40°F, sequester carbon that would otherwise be lost from the soil, make cacao trees less vulnerable to pests, and provide nutrient-rich leaf litter as well as protection from wind and soil erosion (Rajab et al).

Companion trees offer many side benefits for cacao farmers. They offer ventilation which helps to reduce the incidences of fungus on cacao. Plus, by planting companion trees the farmer is increasing and varying the farms productivity. Instead of solely relying on cacao for financial survival there is a second or third crop that can produced for profit while helping cacao to flourish. By adding companion trees the biodiversity of the ecosystem is improved. A true win – win?? As positive as the use of shadow crops sounds, there are of course disadvantages including the possibility of severe drought. When there is limited access to water, the shadow trees could take needed water away from the cacao tree.

Currently, there is a race against time to develop new varieties of cacao that can help combat not only increased temperature from climate change but also a variant that would be hardier. The large chocolate manufacturers (Big Chocolate) are working with scientists and farmers to develop a disease immune and drought resistant strain of cacao. There are many critics who dispute altering cacao for taste and historic concerns but with the impeding change of climate, Big Chocolate is investing in science for its survival. 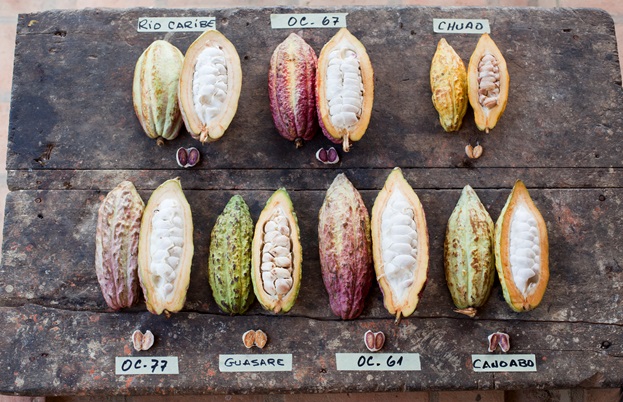 With cacao being such a temperamental crop to grow, it is no surprise that the seeds are recalcitrant. This means that the seeds do not survive the drying and freezing process because they lose their viability in temperatures less than 10 degrees celcius. Cacao beans cannot be stored in regular gene banks, so breeders have difficulty maintaining different strains. Geographically, climate change is altering where natural cacao is grown. With deforestation, pollution and increase in urbanization; seeds must be safely stored to ensure the diversity of cacao. The sustainability and diversity of cacao must be preserved, it is surprising that the private sector has not come further in ensuring the continued survival of original cacao strands.

Where will the epicenter of future cacao production be? With West Africa losing up to 90% of its suitable cacao growing areas, who will dominate the future cacao trade? There are too many variables to hypothesize an answer. Besides the aforementioned effects of climate change that will decimate cacao production, add in unstable political regimes and potential military conflicts. Education and scientific experimentation are the only viable solutions for the continuation of cacao production.

Handley, Liam. “The Effects of Climate Change on the Reproductive Development of Theobroma Cacao.” ProQuest, vol. 1, no. 1, 2016.