The sourcing and production of chocolate had a direct effect on its place in the social hierarchy in different societies and cultures across time. It is possible to see this by going in depth into three chronological time periods in different places in the world where the allure of cacao had spread. By an early exploration of Mayan chocolate production to Venezuelan plantations ending at the discovery of the Cocoa press in the Netherlands.

Mayans revered chocolate, it played an essential role in their stories of origin and cosmology. It was used in burial rites and great ceremonies. Cacao was grown agriculturally by the Mayans 1.

One of the only direct evidence discovered about how Mayans made their chocolate is found in this vessel on the right-hand side which shows a lady pouring chocolate drink from a height into another cup. This was to create the foam that was extremely prized in the Mayan culture; it was thought to be the breath of the Gods.

This Maya Princeton Vase is evidence for the heavy usage and importance of cacao in the Mayan culture. It has engraved hieroglyphics for the word cacao coupled with cosmological depictions.

The Maya had many ways of using Cacao to make food.

Tzune – This is a mix of cacao, maize and sapote seeds.

Saca– A gruel made from cooked maize, water, and cacao.

The flavoring that was commonly used was vanilla and ‘ear flower’2. These different ways of cooking show a creative and vibrant diversity in the usage of the cacao pod. It is highly developed and adaptable. It shows cacao to be an essential part of the Mayan culture and diet.

This video shows us how labor intensive and time consuming it was to make chocolate drink in the Mayan style. The cacao beans have to shelled, roasted, dried in the sun, ground and after this long process mixed with water ready to be consumed.

The high-quality strain of Criollo cacao is native to Venezuela. It started being produced agriculturally at the turn of the seventeenth century. The first recorded shipment is in 1607 from La Guaira to Spain 3. This was under the influence of Hispanic colonization, those working on these plantations were slaves and laborers 4.

Here the cacao was so abundantly grown it was consumed on a regular basis by everybody, from slaves to lords. There were three different styles in consuming the cacao 5.

Cerrero– ( rough and ready, bitter ) This was just plain cacao dissolved in water with no added flavorings or sweeteners. It was widely drunk by people in the interiors.

Chorote– Made by creating solid chocolate balls which are dissolved in water, added to this is muscovado sugar. The chocolate balls were created by boiling ground cacao to separate the fats and solids. This was drunk by people in the cities as well as given to slaves and laborers for lunch and dinner.

Chocolate– Made by mixing balls of ground chocolate mixed with sugar or honey, toasted corn, seasonings such as cinnamon, ginger, and allspice. This was consumed by the Spanish elite at morning and noon meals.

The mass production led to cacao being available for everybody to consume. However what marks the social classes is by what process they made their cacao and what was added to it. Also the number of cacao beans used in the food and the time and effort of making it.

Conrad Johanes Van Houten discovered, along with his father the Cocoa press and Dutch process chocolate 6.
.

Another process invented was the conching of chocolate. This was invented by Rudolfhe Lindt in Switzerland 7.
. It created smoother chocolate and covered the origins and original flavors and textures of the cacao bean, hence a bean sourced from anywhere of any strain could be used. The image below portrays the process of creating smoother chocolate. 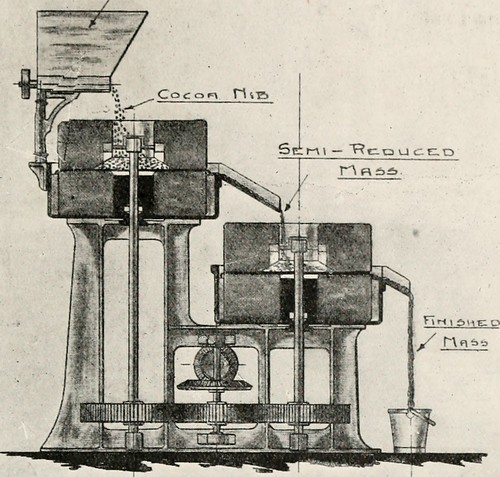 These invented process allowed for the anonymity of cacao in the chocolate drink and bar. It became possible to mass produce chocolate without knowing of the origins and sourcing of the cacao bean that went into the chocolate. This created a lot of distance between the agriculture of growing cacao, strains and qualities of the pod and the consumer of the chocolate.

This kind of mechanized industrialized mass production allows for a lot of chocolate to be produced. When chocolate production moved to such a mechanized way of being made, it became widely available for the average consumer. In today’s world chocolate is a regular household good with a large gap between knowledge of the sourcing and production of chocolate and the regular consumers of chocolate. The intensive agricultural development of cacao with the support of slave exploitation and the inventions of chocolate processing in Europe led to chocolate as is known today.

The introduction of chocolate to Europe plays a significant role in the transformation of customs and beliefs that are currently associated with it. As chocolate expands into European countries, it has major implications on matters of class and politics. The development of these beliefs is best viewed through a historical narrative of chocolate’s evolving role in European society.

Until the 16th century, drinking chocolate was an unknown custom to Europeans. Although Christopher Columbus allegedly encountered cacao beans on one of his missions to the Americas, it was Hernan Cortes who was the first European to taste chocolate (Presilla, 2009). Initially, he found the drink “more a drink for pigs, than a drink for humanity (Coe & Coe, 2013, p. 110). However, through their relations with the Aztecs, the Spanish became aware of the value of cacao beans (Presilla, 2009).

After the Spanish conquest of the Aztecs, chocolate was imported into Europe and quickly became popular among the elite. While it was still served as a beverage, the Spanish altered its taste by adding honey or sugar to reduce the bitterness (Presilla, 2009). This “Hispanicized chocolate” expanded into England, Italy and France quickly after its discovery (Presilla, 2009, p. 25).

Although the taste of the chocolate was slightly altered, Europeans continued to associate drinking chocolate with high social standing (Presilla, 2009). Drinking chocolate was still considered a luxury and was primarily consumed by the elite. This is mainly because it took a great deal of effort to produce the beverage. Furthermore, it was custom to drink chocolate from luxurious utensils, such as the Spanish mancerina and French trembleuse cups and saucers (Presilla, 2009).

These images symbolize the integration of drinking chocolate into elite customs as well as the formal nature by which chocolate was consumed. Thus, the consumption of chocolate in Europe was historically associated with matters of wealth and class that provides meaningful insight into the customs that developed as a result.

While chocolate consumption is Europe became a custom tradition among the elite class, it was also associated with political issues (Coe & Coe, 2013). This is particularly prevalent in England as the chocolate beverage became popular during a time of “political and social upheaval” (Coe & Coe, 2013, p. 161-162). There were tensions that existed between the king and parliament that were exacerbated by regular meetings that would take place at English coffee-houses. These coffee-houses hold political significance as their popularity threatened the King’s authority and he tried multiple times to have them shut down.

In conclusion, a historical analysis of chocolate’s consumption in Europe highlights associations with matters of class and politics. Along the way, its consumption was specified to the elite classes and held certain political affiliations, particularly in England. As a result, certain customs and beliefs became tradition among European societies that have played an integral role in shaping our current fascination with chocolate.