I was recently visiting family in Hilo, Hawaii where I found a bean to bar chocolate company mere minutes from where I was staying. As luck would have it, they also provided complete farm, production and store tours. I was able to take a wonderful tour, see every step of the process, interview Tom Menezes who is the owner, and take some wonderful photos which they have graciously allowed me to use for this paper. Below is a photo of Tom speaking with me about the cacao growing process. The trees in the photo are small cacao trees that have just started sprouting buds. 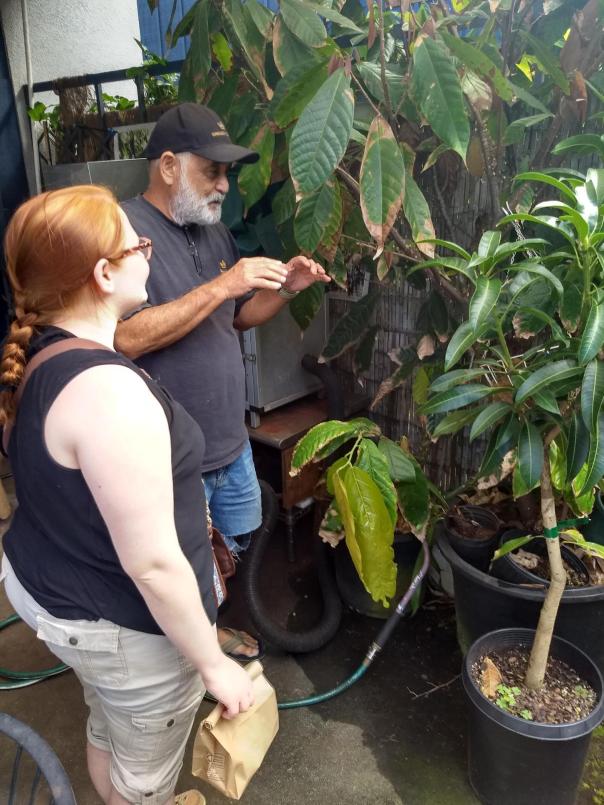 Tom was very passionate about the cacao growing process. You could see just by speaking with him that he wanted his business to be a success, not just for his benefit, but for the benefit of the local agriculture community, and the locals in general. His workers just as equally passionate about growing and producing cacao as he is. During our tour of the farm and production center, I learned a lot about the process they use to make the chocolate I was able to taste in their store. They consider themselves a ‘tree to bar’ chocolate company, as they state on their company website. During the tours they had complete transparency about the process and answered all questions that arose from myself and others in my group. They were extremely educated about cacao and the process of creating chocolate.

We first started on the cacao farm where we saw cacao trees and learned how the pods were harvested from the tree. 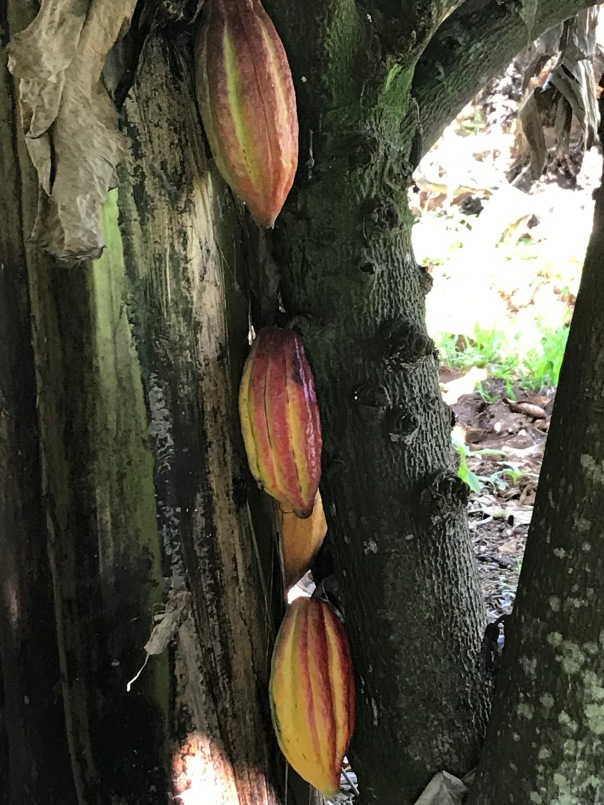 It is one thing to know that a cacao pod grows off the trunks and branches, but it was another to actually see it, as pictured above.

Each cacao pod is harvested, then broken open to extract the cacao beans by farm workers. The beans are then fermented in large coolers, as shown below. 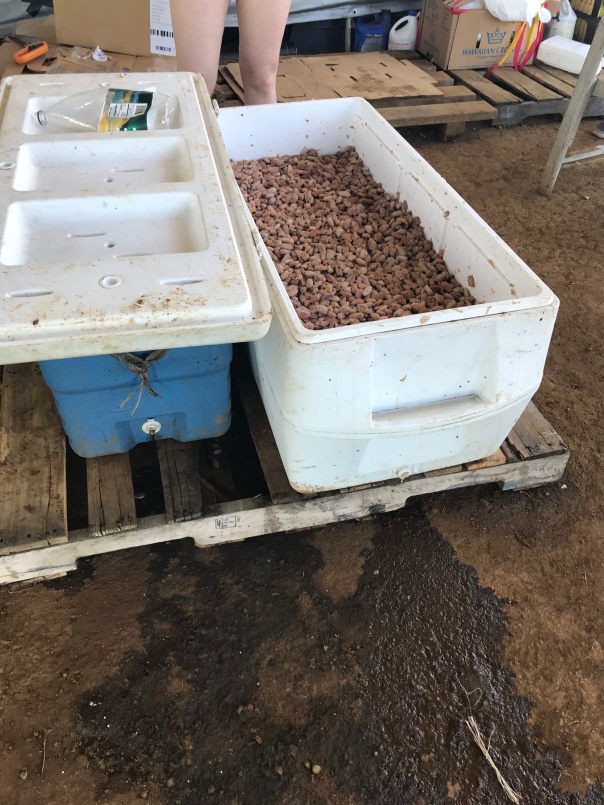 This part was very interesting, as they do not clean the coolers out in between harvests. They compared the coolers to cast iron skillets, you want the beans to ferment in the cooler and season it essentially.

Then the beans are cleaned and dried on their drying racks. Next, they are roasted, as pictured below, then separated from the nibs, ground down, and processed. The entire process from growing and harvesting, to grinding and processing, was displayed in the tour. 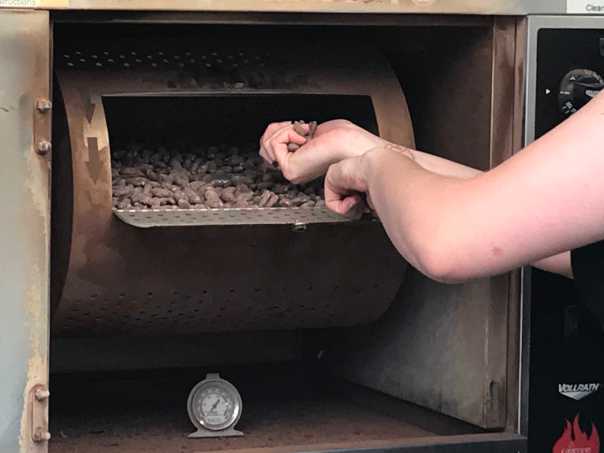 The chocolate bars and drinks sold in their store, in Hilo, is just minutes away from the farm where they harvest the cacao. The store front also includes the production area for the cacao. They sell their chocolate on multiple islands in Hawaii and in various other stores as well.

The Hawaiian Crown Chocolate Company has a diverse work environment, and interesting history. Hawaiian Crown Chocolate has nearly 1,000 cacao trees on a 110-acre farm in Hilo. Their farm consists of cacao trees spaced in between banana trees in order to give shade to the cacao trees and aid in their growth and production. They have been planting cacao there for over 15 years, and the entire process is completed directly in Hilo (Hawaiian Crown, 2017). Nothing is outsourced. The owner of Hawaiian Crown Chocolate, Tom Menezes, has been farming cacao for over 40 years. Hawaiian Crown started off as purely a pineapple growing company, but eventually expanded into cacao as well. “Hawaii, as it turns out, is the only state where cacao can be grown commercially. Hawaiian Crown was one of the first certified organic cacao farms in the United States” (Walters, 2016). Tom has a lot of experience breeding and producing not only cacao, but also pineapple and taro. He has degrees in Tropical Agriculture and Plant Pathology from the University of Hawaii that have aided in his knowledge and success in the field of Hawaiian farming.

As it states on the Hawaiian Crown Chocolate Website, “Hawaiian Crown uses traditional plant selection and breeding methods to develop plants” (About Us, n.d.). They use sustainable farming techniques and few chemicals. One of the company’s main goals is to grow the local agriculture business in absence of sugar plantations that used to be in Hawaii. Sugar plantations used to be one of the largest agricultural businesses in Hawaii, and when they started to pull out of the region, generational farmers took an economic hit (Mintz, 1986). Cacao was first introduced on the islands in the 1830’s, but the 1980’s are when a Hershey conglomerate decided to plant a large amount of cacao trees in Hawaii. In fact, Tom Menezes worked with Hershey on those cacao trees at the beginning of his career, before he went off on his own to open his own company that would further benefit the local economy and agriculture (Billock, 2018).

Hawaii is the “coldest place in the world where cacao can be grown” (Billock, 2018), and not native to the region. It is also the only place in the United States where cacao can be grown. Cacao typically grows in South America which is warmer and more humid than Hawaii. However, the cooler temperatures in Hawaii are actually a good thing in some cases for growing cacao. Hawaii tends to have less pests than other areas with a warmer climate. The downside, however, is it takes longer to ferment in the colder climate. The University of Hawaii actually did some studies starting in 2006 on which cacao breeds produced the best yields and taste. It was funded by the department of Agriculture in Hawaii, and different areas of the islands were chosen based on different climates. It is currently being studied to decide where is best to plant cacao, how the harvest tastes, and what breed thrives the best (Miner, 2015, p. 404).

Tom Menezes courteously answered my questions about his workers on the farm. He let me know that they contract out the workers from another farmer who “has a LLC and uses independent farmers where they are working for him and getting way better than minimum wages.  Also, he is helping people who got out of jail and otherwise who have a hard time finding a job.  So, all local workers who are unskilled but will be trained” (personal communication, April 30, 2019). Tom said that switching to local contract farmers improved pay and moral. He also works with other farmers in Hawaii to help them switch to local and contract workers to help improve the local agricultural community.

One of the things about the Hawaiian Crown Chocolate company that makes it so ethical in the chocolate industry is its transparency. This company is completely transparent about its supply chain, sourcing, and hired farm help. One of the biggest flaws in the chocolate industry right now is its lack of transparency. We especially see this with larger companies like Hershey and Cadbury. It is very hard to know exactly where a bar of the chocolate you buy in a store in America comes from, who helped farm the cacao beans that made the bar, and who processed those beans. I believe more companies should make their supply chains more transparent. This will increase not only awareness, but also force the companies to show how they are getting their chocolate and how the farmers are being treated and paid. This may increase the price of chocolate; nevertheless, wouldn’t it be worth a few extra dollars. Hawaiian Crown chocolate bars were a bit pricier than the ones in the supermarket. Each bar costs about $8, but you also know exactly where the cacao was picked, who picked it, and the entire process of production. “An increasingly aware chocolate-loving public would be willing to pay extra for a more ‘ethically correct’ product” (Coe & Coe, 2013, p. 263). People are also searching for better quality chocolate, that larger companies are not offering, and will pay more for that quality.

“Every actor in this industry must convey that every step of the process, from planting a tree to selling a bar of chocolate, is inherently valuable” (Leissle, 2018, p.188). Tom Menezes and the Hawaiian Crown Chocolate company strive for this. They emphasize transparency in the entire process, and fair treatment and wages for their workers. The tours they give show the importance of each part of the ‘tree to bar’ process. This is exactly what many people are searching for in their chocolate, that it be both ethical and tasty. A wonderful combination.

About Us. (n.d.). Retrieved from https://hawaiiancrown.com/about-us/

Kifer, C. (2016, January 11). From Tree To Bar on the Big Island: Visiting a Chocolate Farm in Hawaii. Retrieved from http://everintransit.com/big-island-chocolate-farm-hawaii/amp/